In an increasingly fast-moving world, the older generation can find it hard to engage. Then, social isolation and loneliness pose serious problems too, like cognitive decline, depression and heart disease.

The Frozen Man highlights the tragedy of social isolation in older age, the difficulties posed to the elderly by changing technologies, institutions and ways of life, and it ultimately points to hope. The Frozen Man is influenced by the films of Ken Loach, and Warp films like The Virtues (2019) and Dead Man’s Shoes (2004).

Chris is sixty-five and has been divorced for twenty years. He lives alone in a pokey flat above a charity shop. He wears a hearing aid and is on the NHS waiting list for eye surgery. He lives on a pittance. His children have moved away to busy lives, and his ex-wife now lives with one of his old school friends, further reducing his social circle. Chris’s brain is slowing, he’s a creature of habit, and he struggles with the pace of new information.

Chris’s best friend, Keith has motor neurone disease and is in a wheelchair. Chris and Keith meet each Friday night and put their world to rights over Deuchars and backgammon. When Keith falls asleep on a train after a Friday night game and misses his stop, he finds himself at the end of a line, in the wintry countryside, with no train home. In an attempt to flag a taxi, he’s hit by a drink-driving farmer in a Land Rover. The farmer leaves Keith at the side of the road and drives off. Keith doesn’t die of the impact. He dies of hyperthermia, six hours later.

Chris keeps informed of the police investigation into Keith’s death through Keith’s adopted daughter and carer, Laura. CCTV puts the farmer around the scene, and locals ‘know’ what’s gone one. But police enquiries don’t initially show that he was even involved, or, when further evidence does emerge, that he was in fact, drunk.

Chris feels heartsick when, in court, the farmer gets off with just six penalty points and a fine for leaving the scene of an accident. Chris knows that the farmer was drunk and that he left Keith to avoid the legalities of his more serious drink-drive crime. Faced with this injustice, Chris is forced to engage with the world. Either that, or see his friend’s unlawful death and the lying farmer go unpunished, and see his own slide into irrelevance sealed.

Despite losing his father soon after to a stroke, and then losing the friendship of his sister as she commandeers the will, Chris sets about difficult change. He discreetly garners a taped confession from the farmer, finds a new friend, and proves that the hard work of being open to new information, far outweighs the harder work of rejecting it. 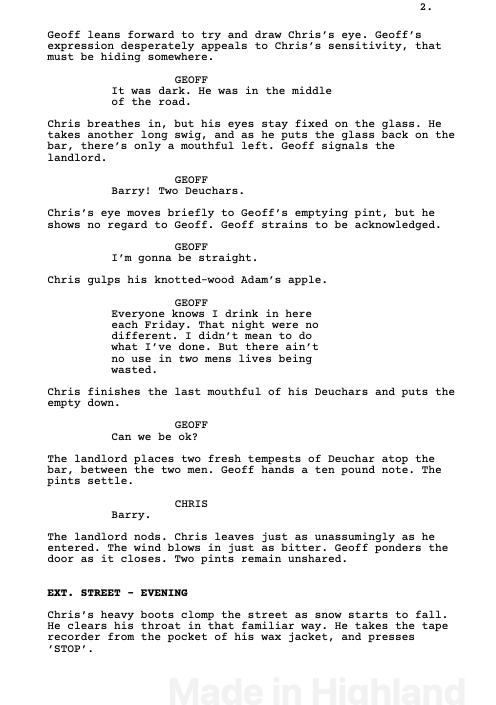